La Porte—the City Of Lakes. This city has been associated with its surface waters, since its very beginning. 19th Century historian Jasper Packard noted that these lakes were the very reason why the county seat was located here, in the first place. And back most of a century before that, in the Illinois Country period, the French habitats of this region had called them "La Petite Lacs" the little lakes" (in reference to Lake Michigan). Native Americans, particularly the Potawatomi, had a special reverence for lakes. And La Porte's lakes have special qualities. They are located near the southern limit for sizable glacial lakes in the country. And all of La Porte surface waters, both disjunct and interconnected are important and precious resources. To have a chain of glacial lakes that are actually integrated into the fabric of a city is rare indeed south of Sweden, Canada or at least Minnesota. Yet, here in La Porte, we have just that. There currently are 10 relatively deep lakes within and around the north & west sides of La Porte—Pine (sometimes divided into North Pine & South Pine), Stone, Hennessey, (a.k.a. Harris), Lily, Clear, Lower, Fishtrap, Horseshoe, Crane & Orr lakes. U.S.G.S. topographic maps clearly show them. Lily, Clear and Lower (pronounced "lauer") lakes were all portions of one giant lake called Harrison Lake, in the early 19th Century. Great losses to the acreage of the north side lakes were primarily due to filling for the creation of causeway grades built to support streets, roads & railroad tracks. (See Map 1 & Map 2)

On the south & east sides, several additional (but more shallow) lakes also existed. Among them were Pottinger (near the County Home), Butterworth, Walker, Ludlow's, Ridgway, Boice lakes. Pottinger, Butterworth, Butterworth Walker, Miller's & Boice lakes still exist, mostly intact, with a few alterations in some cases. Ludlow's Lake is presently Beechwood Golf Course. (Some of the wetland remaining within it are remnants of this lake.) Ridgway Lake was badly fragmented, but surface water resources remain in the southern half (LPCCT's Ridgway Wetlands) and in the north-central part of this old lake basin. Great losses to the shallower lakes on the south- & east-sides were primarily due to tile & drainage operation for agricultural purposes. (See Map 3)

Both the north-side and south- & east-side systems lie within the Mississippi drainage basin. But the function of drainage systems for the north-side lakes (historically call the "Big Sewer") was terminated around the turn of the 20th Century. Drainage from this system into the Mississippi (via the Illinois & Kankakee rivers) did not resume until the lake flood control system went into effect, circa 1998. Headcreek Wetlands, near the LP Municipal Sewage Treatment Plant, is now used as a storage area for floodwater from the north-side lakes. The excess water from Headcreek Wetlands then flows down Travis Ditch to the Kankakee.

Boating on La Porte's chain-of-lakes is an ancient tradition. In historic times, it likely began when the Potawatomi or the Miami first plied their canoes or dugouts across these waters. They were probably looking for game or other sustainables. Since the establishment of the town here in 1832, boats of all kinds have long traversed these local waters—rowboats, speedboats, johnboats, rafts, iceboats, pontoon boats, sailboats, catamarans, excursion boats and more have all plied these waters. I can recall in the 1970s when a transplanted Louisiana Cajun took his pirogue over the waters of Lily Lake every day when that lake was sufficiently ice-free. He collected snapping turtles from his traps for turtle soup. Countless boating fishermen have cast lines on these lakes! walleye, pike and other fish species. In 1956, the National Ski Meet was even held here at Stone Lake, before such events were inextricably dependent upon television and other mass media.

But without a doubt, the most notable of all boat travel that ever took place here occurred from the 1870s until the early 1890s. This was the heyday Of the steamboat on La Porte lakes! From Lily Lake in the south to North Pine Lake in the north these excursion boats plied their course, delighting their passengers along that long watery route. Clear and Lower lakes were then also part of our chain of lakes. The steamboats brought statewide fame to La Porte, back then. One summer back then, newspaper editors held a convention here. Having been treated to a night time cruise, declared La Porte to be "...the prettiest little city in Indiana". ( See Map 4)

But chronically low water levels ended the steamboat excursions by the 1890's. This lengthy period of low water levels occurring in early 20th Century precipitated a multitude Of "ills" that would befall this lake system. Not the least of these was a kind of public "amnesia" about the lakes' former areal extent. Too frequently, this "amnesia" resulted in our lakes being permanently fragmented by causeways, atop which streets, railroads and other thoroughfares were built. Often, the resulting smaller disjunct lake fragments were subsequently filled. When water levels rose again, the surface area of the lake system had been significantly diminished, creating floodwater situations.

Despite this, a considerable extent of the interconnectedness of these local lakes remained through the 20th Century down to the present. But the public consciousness of that extensive interconnectedness never returned to what it was in the heyday of the steamboats, Pine and Stone, and to a lesser extent, Clear retained their fame as recreational lakes. Not so, the smaller quiet- water lakes, like Lily, Hennessey and Lower. Aside from the activities of local fishermen, these once essential parts of the steamboat itinerary have been forgotten, largely ignored, and too often abused.

Back in the 1970s, my brother and I pondered the recreational potential Of the interconnected water of this chain-of-lakes. We decided to test it out by traveling by johnboat from Central Ave. to Johnson Road. In only two places did we have to portage. One was at Hawthorn St. (where the subsurface culvert pipe linking the two parts of Lily Lake is less than two feet in diameter). Ironically, during the lake flooding in the 1990s, we were then able to boat over the top of that inundated street- The other place was at the Weller Ave. bridge (really a giant culvert). Incredibly, in the 1950s, when water levels were much lower, fishermen would sometimes be able to traverse under that "bridge". They would lie down in their boats and "hand walk" their vessels until they came out the other side. Certainly, no place for claustrophobics!  But by the time we took our trip, that passage had been completely blocked by water and muck.

The trip via johnboat took about 2 1/2 hours. The characteristics Of these interconnected lakes changed successively like a kaleidoscope, as we traveled this route. Lily and Hennessey were quiet, with abundant wildness. Stone had choppy, open, deep water with the beautiful, heavily-wooded shores of Soldier's Memorial Park. And from the instant we left the Stone Lake Channel, huge Pine Lake was abuzz with activity. SO much so, that Our little johnboat had to practically hug the shore, in order to avoid getting swamped by speedboats and skiers. But we plodded forward, rowing past Pine's beaches, shoreline neighborhoods, commercial developments and parks. A very small, slightly submerged island then still remained in North Pine Lake, just off the Holmes Island peninsula. It had been created from the dirt of a temporary road linking Holmes Island with Pine Lake Road, during the lakes' dry-up in the 1960s. As water levels had begun to rise, the road was bulldozed into a pile. Eventually, as they rose further, that little island resulted. In later years, it must have posed a caution for water-skiers and speedboaters. But for us then, upon reaching it, this "snag" provided us with mild amusement. We took turns standing upon it, while the other took pictures.

From there, we rowed to the tree-lined slopes below Johnson Road. Having completed then this curious trip, we headed back over to where Kiwannis- Teledyne Park is today and landed the vessel. ( See Map 5.)

It had proved to be a most interesting, intriguing trip. But what stuck most in our minds was that we very well may have been the first people in the 20th Century to take this particular boat route. Even though it had been a routine course for steamboats in the 19th Century. But why?

Why hadn't someone else during those 80+ years recognized and utilized the recreational value of all this interconnected water, which had been so well known and so frequently used, in the Gilded Age?

Now a small johnboat is a far cry from the luxury of an excursion boat, even one from the 19th Century. Yet, just traveling that route gave us some feel for why those 19th Century editors raved about it—and the City of La Porte, back then.

But now, every August, the La Porte County Conservation Trust, Inc. (LPCCT) and the Northwest Indiana Paddling Association (NWIPA) co-host the annual event to celebrate La Porte's remarkable chain-of-lakes. Details of each annual celebration are provided to the public, prior to the date scheduled for the event. And both the LPCCT and the NWIPA support a new proposed initiative to replace the old dilapidated Weller Ave. culvert with a new bridge. Thereby, once again opening the way for boat travel to occur with ease along the full north-south extent of La Porte's Chain—of Lakes!

The LPCCT is also engaged in other important preservation efforts for La Porte's lakes, like preserving their remaining natural shorelines.

The acquisition of the 62 acre Ridgway Wetland, on La Porte's southeast side is the LPCCT's most ambitious littoral project, to date. This preserve contains the best relic features of the largest natural water body in the south-and- east sides system. In the 1 9th Century, the extent of its surface waters were area was second only to Pine Lake in area coverage. Today, Ridgeway Wetland's surface waters integrated with wooded tracts presents a wonderful habitat for native fauna. This is an especially good birding site,

Additionally, the LPCCT is pursuing the preservation of other littoral properties along the shores Of La Porte's lakes. Specifically, the pursuit Of possible easements on natural wild shore-lands along other portions of Pine Lake and also Lily Lake are currently be considered.

In addition to La Porte's lakes, preserving natural wild littoral areas of other county lakes like Hudson Lake and Saugany Lake are future goals of the LPCCT.

If you are an owner of natural shore-land along a lake or wetland in La Porte County—particularly if the lake or wetland that your land lies along is located in greater La Porte. And you are interested in seeing your shore-land remain in its natural state, in perpetuity. Then, you may wish to inform the LPCCT about yourself and your shore-land by leaving your name and contact information at this email link.

Or even if you don't own any such shore-land, but you love our natural water bodies and the wildlife that lives within them. Then, you may wish to volunteer to help this noble effort to save them, by leaving your name and contact information at this email link. 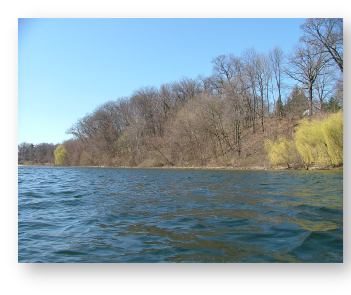 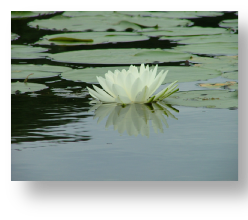 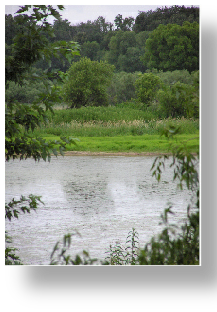