Once upon a time in the 19th Century, it was said that a squirrel
climbing a tree growing on the north bank of the Ohio River could travel
northward to Michigan's southern border, without touching the ground. Well,
that world is now long gone. Indiana, a state once primarily (85%+)
covered by forest—literally from one end to the other—now has less than
1/5 (19%) of its surface covered by forest, statewide. And nowadays,
forest cover in the north half of Indiana is far more meager than the
statewide figures. The entire Northern unit, which covers more than half of
the state, holds only 9% of Indiana's forest resources. [Link to IDNR Division of Forestry ]

Primarily what remains here in the north are small,
scattered woodlots, that "pepper" most of this half of the Hoosier State.

But if you look closely at Map l. (an IDNR map of the forest cover across
Indiana). And then at Map 2. (a close-up of this map focused on the
northern third of the state). You will see a notable exception to this rule—
the Moraine Forest of Indiana's Coastal Region.

The heart of the Moraine Forest lies along the crest of the Valparaiso
Moraine. But a specialized type of the Moraine Forest lies to the north of
the "Valpo" Moraine. It is called the Boreal Forest. Within this Boreal Forest
are relic plant assemblages from the immediate post-glacial age. The
species are those that are typically found far to the north, in sub-polar
regions.

Stretching from Hudson Lake to just north of Valparaiso, the Moraine Forest
of La Porte and Porter counties is the longest semi-contiguous forestland
north of the mid-Wabash Valley. And it is the largest natural ecosystem
remaining essentially unprotected in Northwest Indiana. NIRPC's 2040 Plan

In response to this situation, the five local land-conserving organizations—
Shirley Heinze Land Trust (SHLT), Save The Dunes (STD), Porter County
Izaak Walton League (IWI-A), the Woodland Savannah Land Conservancy
(WSLC) and, of course, the La Porte County Conservation Trust (LPCCT)—
formed the Moraine-Forest Committee. But this committee was not the first
attempt at systematic protection of our great Moraine Forest.
Indiana participates in the Forest Legacy Program (FLP). Within participating
states are zones with notable forest resources. They are designated as
Forest Legacy Areas (FLAS). Indiana has six of them. Within the FLAs,
owners of highly rated forestland could compete to voluntarily enter into
conservation easements with IDNR, in order to have their forestlands
permanently remain as such. [ Link to IDNR Division of Forestrv's Forest
Legacy Program]

Of Indiana's six FLAs, four of them are located south of Indianapolis, mostly in the Hoosier Hill Country. Only two FLAS exist north of Indy—and one of them (covering greater Allen County) has yet to produce a single Forest Legacy project. (See Map 3.) But the other one—our own Northwest Moraine Forest Legacy Area, which encompasses the Moraine-Forest—has indeed produced numerous potential and actual projects. ( See Map 4. ) And because of the exceptionally high levels of biodiversity here, the acreage
requirements for Forest Legacy projects in our FLA here are much smaller
than those in other FLAS in the state.

The most notable of our Forest Legacy projects here being the Rattlesnake Creek Project, near Hudson Lake. This is a wonderful tract of forestland providing habitat for Yellow Birch, Pileated Woodpeckers and many other exceptional flora and fauna, In fact, the sites for the state Heritage Plant Species in the three coastal counties are almost entirely located in either our Indiana Dunes or our Moraine Forest.  ( See Map 5. )

But with a great competition among states for FL funds, year-after-year, the Indiana FLP has fallen seriously short, dollar-wise. And with the abundant forestlands in the Hoosier South, those four FLAS lying beloved the National Road tend to devour the lion's share of even those meager FLP monies bound for Indiana. It thus became abundantly clear to the INDR that the FLP alone would never achieve enough permanent protection for all of Indiana's critically important forestland—and most particularly, places like our Moraine Forest.

So back in the Spring of 2004, in an attempt to address this issue, the IDNR's Division of Forestry held focus group sessions in each of the six FLAS across the state. Our sessions were held at the Barker House, in Michigan City. IDNR noted that of all those focus group sessions, ours had the greatest participation and enthusiasm. But at the conclusion of those sessions, the IDNR made it very clear that saving an invaluable resource like our Moraine Forest would ultimately be up to us locals. But how could this actually happen?

For several subsequent years, several of the former focus group participants mulled over some theoretical concepts—shooting e-mails back and forth and "kicking around" a number of ideas. Then, early in 2006, still unsure of exactly how to proceed, they decided first to form a committee (more of a task force, really), After that, they began to meet regularly and deal with every issue, constraint and opportunity -- both central and peripheral -- to the vision of a permanently conserved Moraine Forest.

Representatives from the above five local land-conserving groups formed this committee. But we also sought input and assistance from IDNR, NIRPC, and other relevant agencies to assist in our efforts. But we knew that to ultimately succeed in this effort, we must have public support—most particularly, from forest landowners. This conservation effort had to encompass forestland that was or would become a great variety of things, like nature preserves—wildlife recreation areas—working forests— buffers for eco-friendly development—and more! It would involve the systematic gathering and coordination of a myriad of valid scientific data. It would have to be an incentives program that strongly appealed to forest owners, the scientific community and public at large.

The protection of these forestlands would variously involve acquiring land ownership and/or conservation easements... supporting conservation restrictive easements and IDNR programs, like Classified Forest & Wildlands... end conducting site visits, many site visits... and much more. All of these above land-conserving organizations currently own certain portions Of the Moraine Forest. The LPCCT, for example, owns Wintergreen Woods (which is also part of the Boreal Forest). And government agencies , like La Porte and Porter county park departments, the Indiana Department Of Natural Resources and the Indiana Dunes National Lakeshore all own some portions of the Moraine Forest.

Many private landowners have also enrolled their woods in the IDNR Division of Forestry's Classified Forest and Wildlands Program. These programs provide major property tax breaks, along with forest management guidance, for landowners who partake in them. (See Map 6 & Map 7.)

The next step was to hone-in on zones within the Moraine Forest Committee that would function as Core Areas. And eight Core Areas were developed to become the nuclei of this initiative. Within them, an informational campaign regarding the nature and value of these forested lands would be undertaken to introduce to their owners, including a package of incentives for conserving them in their forested state. This included conservation easements. Where a configuration of higher priority parcels existed, and willing seller(s) wished to divest of these parcels. acquisition of them by one of the land conserving organizations would be sought.

These Core Areas are surrounded by Hubs. These hubs are tied together by larger wild-land connectors called Corridors and smaller wild-land connectors to other hub systems called Links. These Core-Hub-Corridor-Link components form the basic units for land conservation networks. (See Map 8) They are used in the Moraine Forest Initiative to prioritize where to begin conservation efforts, and later where to expand these efforts from that beginning.

But it is important to remember that you look at a composite measure including an array of values like impact from fragmentation, soil & water qualities, invasive species danger, present bio diversity (both faunal & floral), recreation value and wood products production, the ENTIRE Moraine Forest ranked among the priority forest areas across the state. ( See Map 9) And when you focus on Northwest Indiana, that priority ranking stands out even more. ( See Map 10)

If you are a forest owner and your land lies within Moraine Forest and are interested in seeing your forest land remain in its natural state, in perpetuity. Then, you may wish to inform the LPCCT, and other member organizations of the Moraine Forest Committee, about yourself and forest land, by leaving your name and contact information at this email link.

Or even if you don't own any forest land, but you love forests and the wildlife that lives within them. Then, you may wish to volunteer to help this noble effort to save them, by leaving your name and contact information at link. Thank you for your interest in this vitally important subject. this Also, the LPCCT always appreciates monetary donations to help maintain our existing trust properties, and work toward further land preservation in La Porte County. 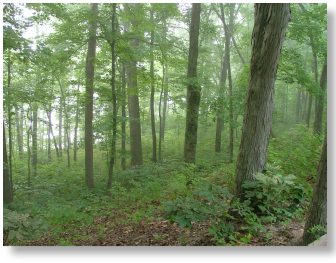